Saturday in florence is like Saturday in any city. Locals pouring into town to do their weekend shopping and tourists milling about in large groups, staring upwards. Just an all around crowded situation. Which is why we got out of town. Pisa and Lucca the destination. Turns out, it wasn’t such a bad idea. The weather had turned runny just as we took our seats on the excursion bus. Rain began pouring down. I never think i am a fan of the organized tourist train/bus/walk, but i nearly always give them a try. I am hardly disappointed; except when it includes food. Which is a big bad bust, most of the time. Those i avoid, because as you know, I am all about the food. Speaking of which. We had steak and eggs for breakfast.There are no photos, because i forgot. By the time i remembered it didn’t look so appetizing. Just trust me; leftover bistecca fiorentina with a couple of fried eggs and hunk of bread, is money.
In Pisa we did a tour of the church, which is beautiful but dark. Too dark to take photos. Because in churches, you can’t wear a hat and you can’t use a flash. The real draw in Pisa is the tower. A leaning tower.I love all the great photos that people fashion; holding the tower up, grimacing under the supposed weight. They never cease to humor me.However, I rarely see this maneuver.
Someone kicking the darn thing over.It is funny, right? That is my husband. He enjoys a good laugh as much as I. We hooted over this one for hours.
Time for lunch. In a tourist town, where restaurants actually name themselves restaurant tourista, getting a good meal is a bit dubious. We found one just outside the main tourist area called Trattoria Bruno.
Mike’s penne pasta with rabbit and boar was outstanding. 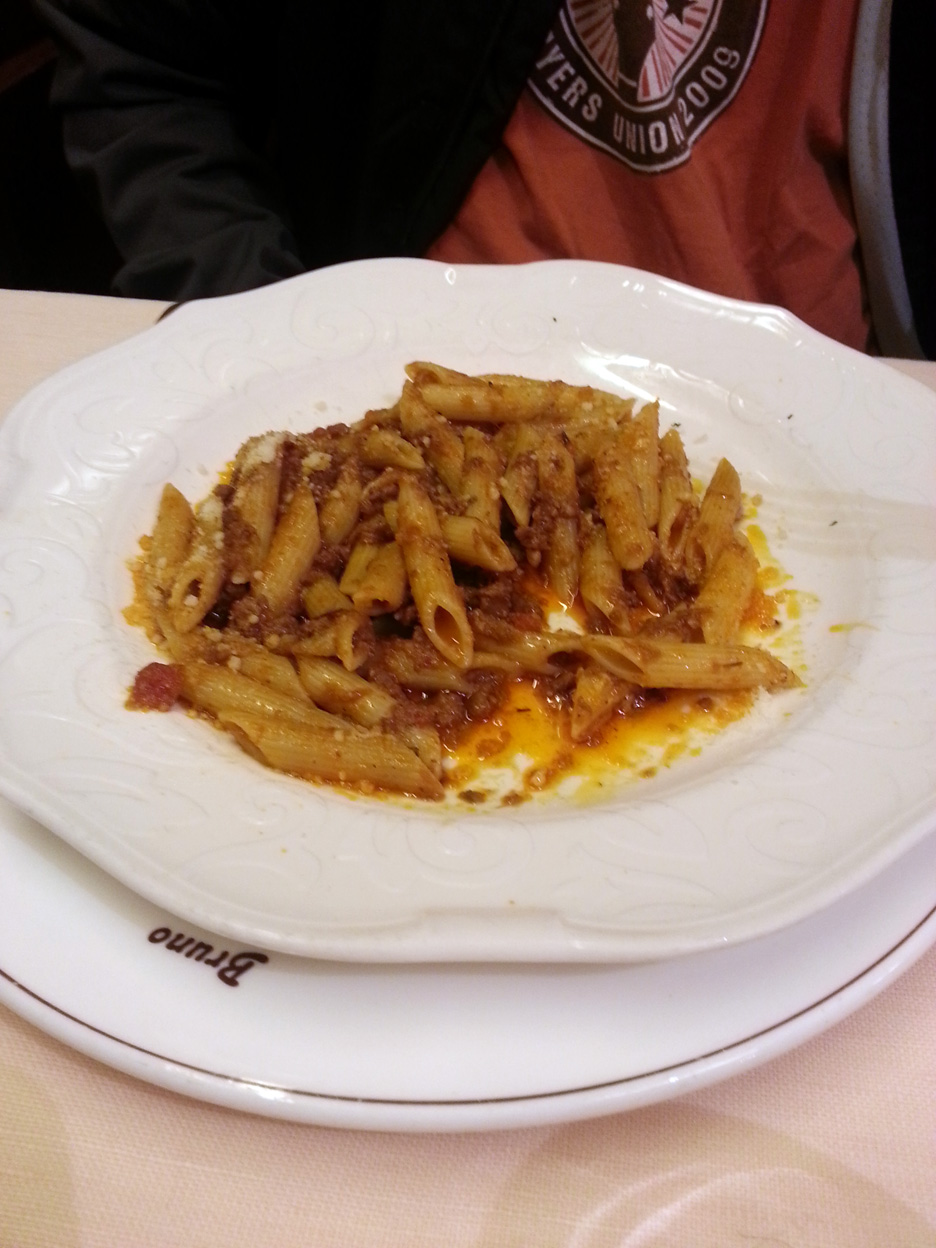 My handmade pasta with porcini mushrooms was also delicious. The pasta so thin, you could almost see through it. 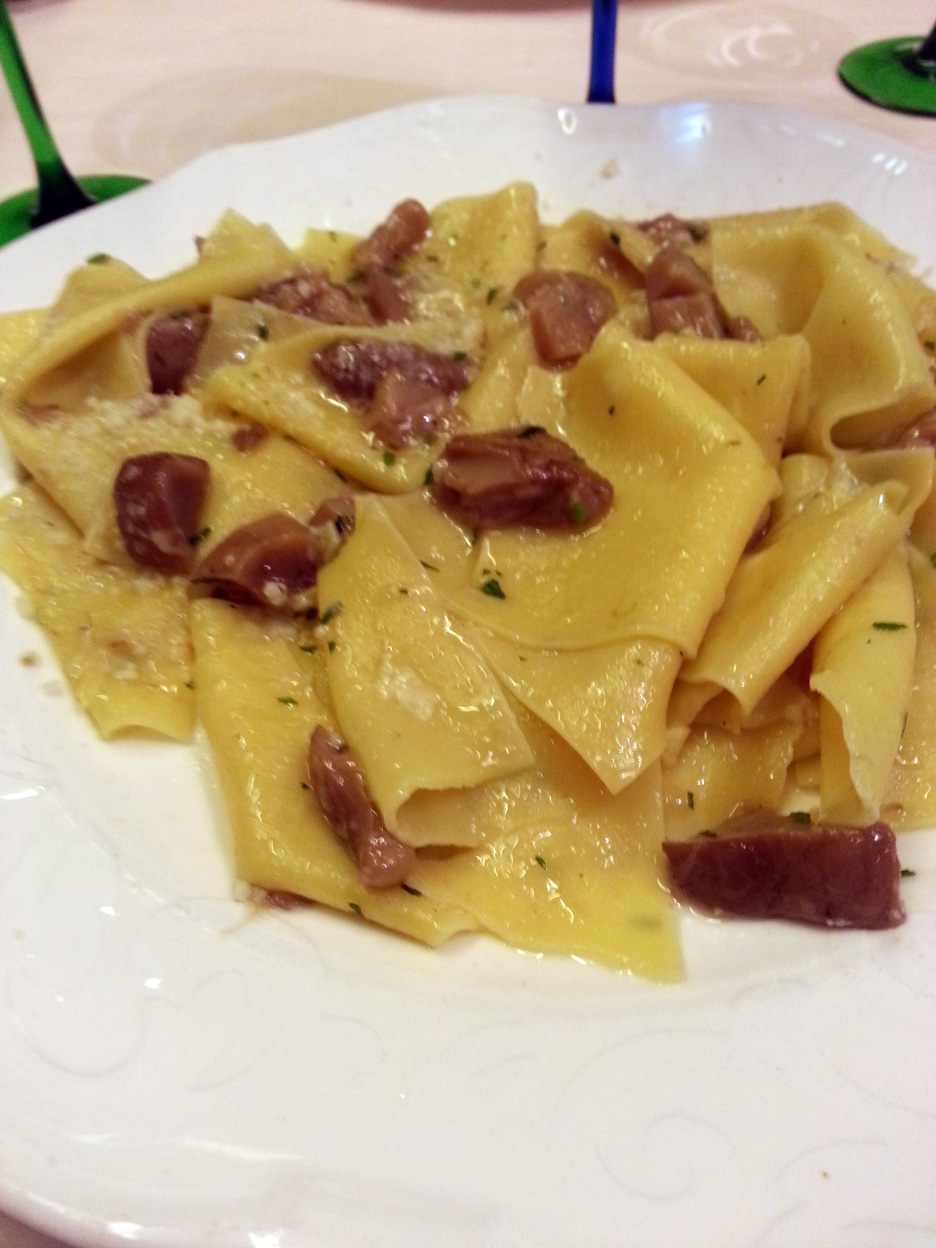 From Pisa we got back on the bus and headed to Lucca; a medieval city that is usually quite lovely.However, on a rainy Saturday with many of the venues closed for the afternoon,
there was little to see. After getting a bit drenched in the rain we stopped for a hot chocolate. In this part of Italy, hot chocolate is more like warm chocolate pudding, than chocolate water. You decide if it sounds better or not.
e poi
which means and then not the poi you eat in Hawaii, which is not Italian by any means. Despite having the same name 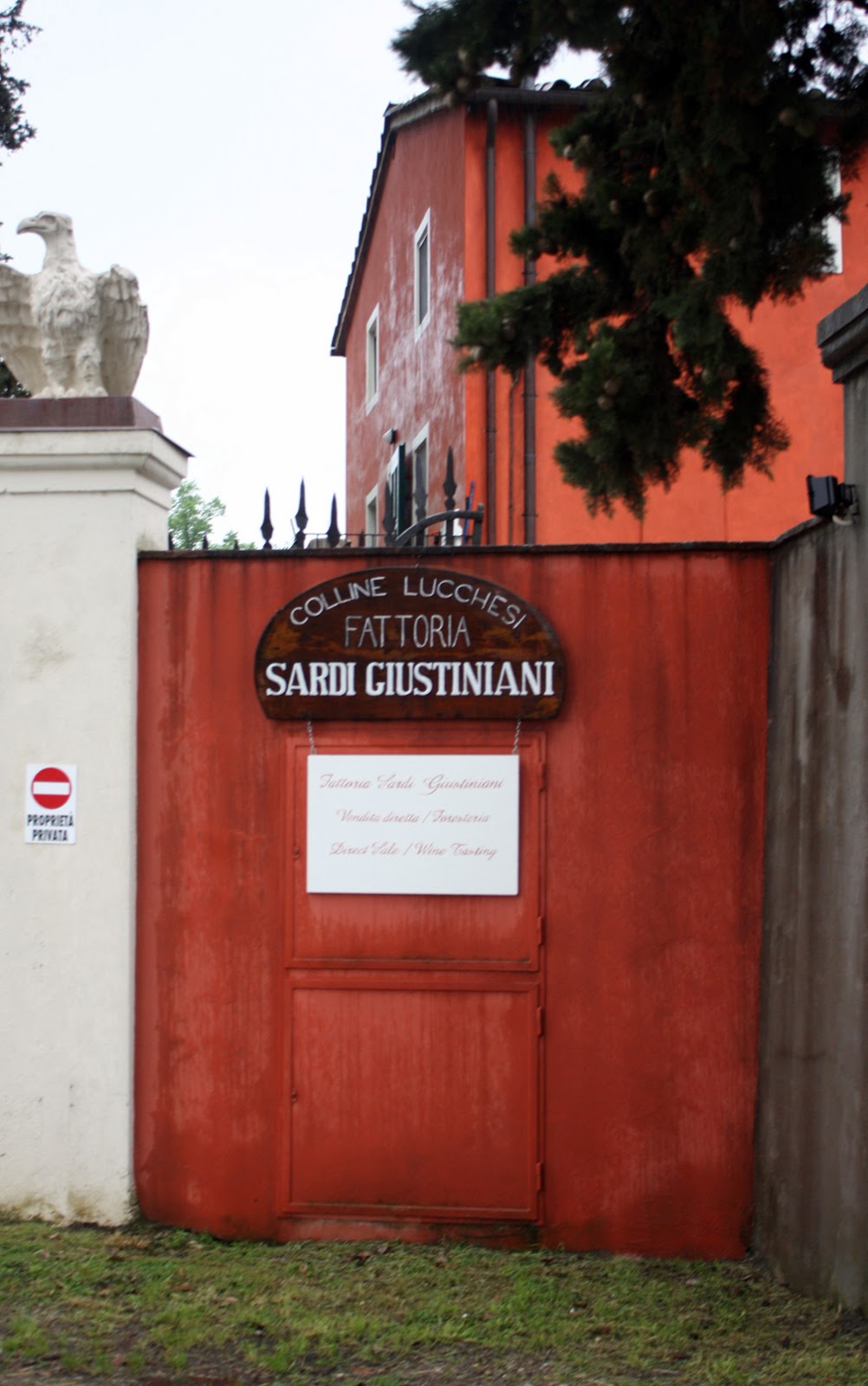 We visited a winery just outside of Lucca, where it turns out, they make the house wine for one of my favorite places in New York City. Sant. Ambroeus. When i was getting married
my dress came from vera wang. Before my first appointment and subsequently all my fittings, I would have coffee and a little something at sant ambroeus. So when the proprietor of this winery in Lucca off-handedly mentioned the restaurant I perked up with “on madison avenue!?!” Sje and i had a bonding moment. It is her brother’s place and all the “house wine” comes from here.
It is pretty good. A tasty drinkable wine. I was set to buy quite a bit, but then my new friend the owner gave me the name of their american distributor, so i wouldn’t have to pay for shipping. Which now means, i’ll probably buy a whole case.
After the wine and the food and the travel by bus, we were pretty wiped out and without plans for dinner. We grabbed a quick porchetta sandwich and called it a night. Actually,a night and half a day,since jet lag reared its ugly head. We slept about 12 hours. Waking up just in time to search out lunch….

my surroundings, my inspiration